I met dad in Antigua for lunch (so you can breath out now if you were worried about me....... jackie!) and after a little walking tour we joined the group for a salsa lesson. Dad brought moves to salsa that even the teacher was previously unaware of. Including the lunge and dip, which resulted in a small domino effect of my travelling friends. Dancing in a salsa club later that night the lunge reappeared but did not seem to catch on.

The next day we journeyed to Copan by a slightly hair raising and incredibly sweaty seven hour shuttle to see the ruins and break our journey to the bay islands. The Copan ruins are really different to Tikal. Tikal is incredibly tall pyramids in unlikely terrain, Copan is all about the sculptures and engravings and the world famous hieroglyphic staircase which depicts the story of Mayan history (at time of chiselling) We got there early and practically had the place to ourselves which was pretty cool. There were also lots of brightly coloured macaws flying about.

Honduras seems very different to the other countries I have visited so far. Less open, less relaxed and not as friendly somehow. I could tell you about the people in Belize and Guatemala because I feel like I got to know them a bit and understand In some way a bit about their culture and history. For some reason I did not feel this about Honduras.

We continued up to the bay islands via la ceba, where we committed to ultimate travelling faux pas and went with the hostel recommended at the bus station. To be fair it could have been worse and was probably reasonable value for money but we were very glad to leave the next morning and arrive in another Caribbean island. Yeay!

Roatan is the island we stayed on, at half moon bay. We got a cabin by the water, it was literally a few steps into the crystal clear bath temperature waters and a few strokes to the edge of the barrier reef. It is the bottom part of the same reef I snorkelled in Belize. The fish were amazing and plentiful. Roatan in famous for its reefs and its easy to see why.

Today we flew from roatan after some serious confusion with tickets. And had less than an hour to get from the airport to the bus. We did it, just! And the bus even left early! 8 hours and a border crossing later we should arrive in Granada, Nicaragua.

Here is the view from the dad, who has so far been mentioned, but not seen! It was surreal to FaceTime Rebecca earlier last week from home and then be FaceTiming the other way around- beam me up Scottie!!! I can report that everything blogged so far is true if not better.
She has been travelling with an amazing group of people and it was sad not to meet up with them again. This should be rechristened The Smoothie tour as the quality of food and smoothies is amazing!! We are enjoying colonial splendour in one of the poorest countries in the world but everyone has smiling faces not something we are used to seeing everyday.

Since I last travelled with Christopher Columbus the Internet Naha arrived and you seem to get it in the most unlikely places. It is amazing that you can see and book everything on line except bus tickets and doing the travelling. It can create insight and build expectation, but it does not prepare you for the beauty of the skyline with volcanos, the flash of colour as a macaw flies overhead or the perfect symmetry of bright coloured fish swimming in shoals just like in Finding Nemo! Best of all is sitting on the beach with a cold beer, watching the sun go down and having another beer to make sure it has really gone in preparation for 14 hours of travel the next day - back to the hammock it is now one week down (although it feels like two) with one more week to go. I am sure that will be just as amazing as the last! 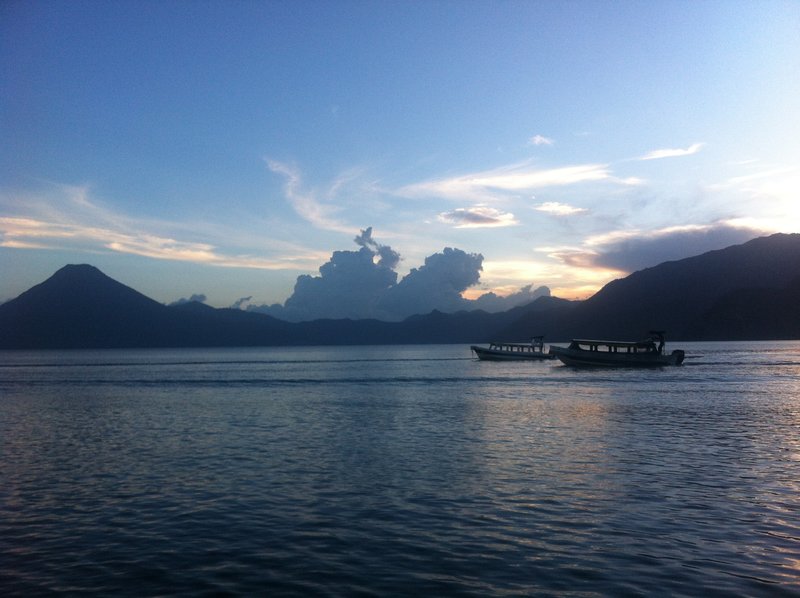 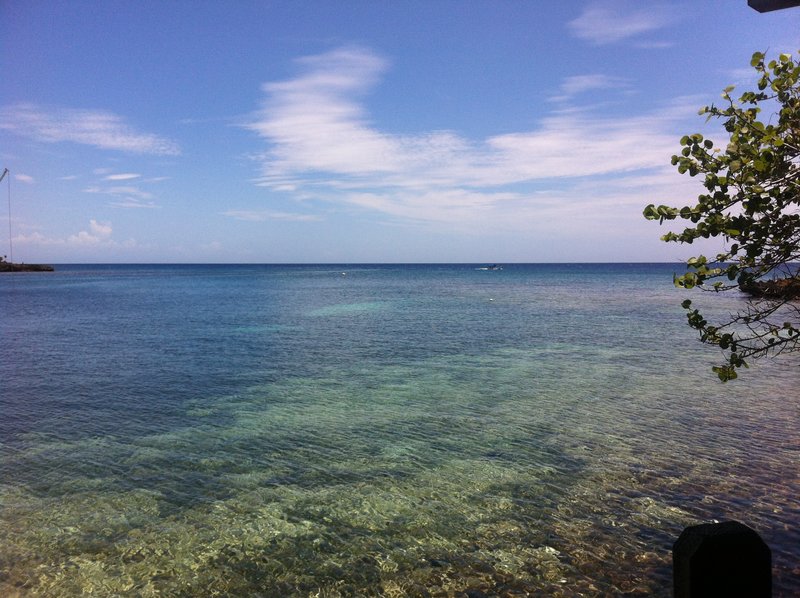 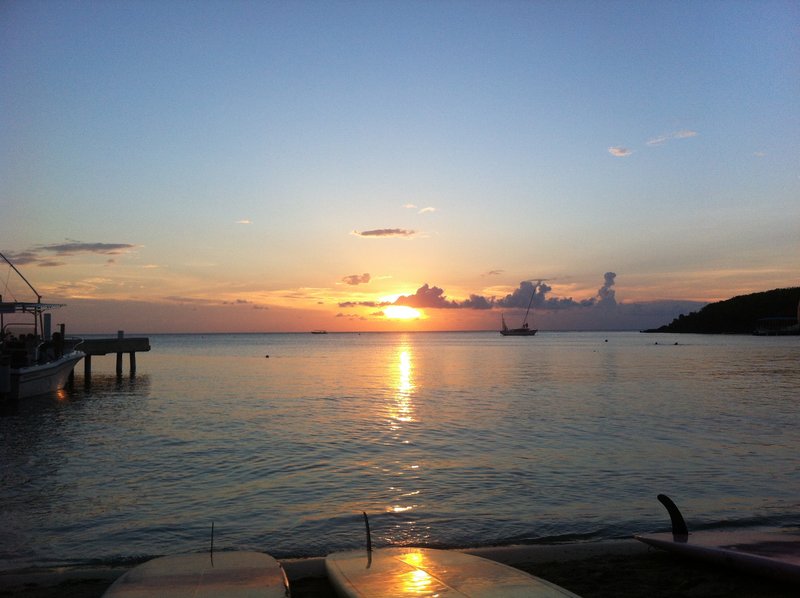 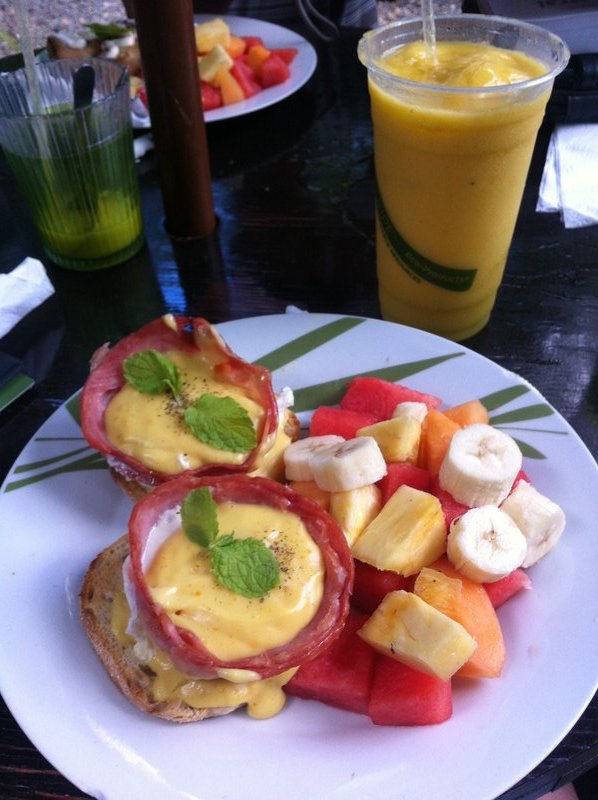 Posted by sp8j 11:19 Archived in Honduras

Previous Next Table of contents

What have you got that we haven't?
We have been sitting by the pond with a glass of warm wine watching the sun go down over the Co-op, our aged koi rushing around among the fading lilies and a couple of angry magpies clattering overhead which always excites our blobby black and white rescue cat!
Keep at it, you two, it brightens our sad, aged little lives, and we hope the beer and the sun don't weigh too heavily on your collective stomachs!
It was good to connect with my wobbly FaceTime eventually - grandpa was most impressed!.....Our love to you both....

Looks amazing - shame we can't wiggle our noses and join you for a beer! Xx

It really looks amazing yes I can chill a little now you with our dad. Enjoy take care

Comments on this blog entry are now closed to non-Travellerspoint members. You can still leave a comment if you are a member of Travellerspoint.

If you aren't a member of Travellerspoint yet, you can join for free.